Welcome to the project overview of the OpenRISC project. The major goal of the project it to create a free and open processor for embedded systems. This includes: 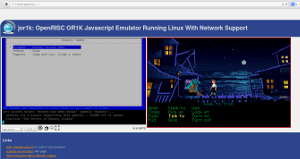 There is an interesting project in case you just want to try out the OpenRISC in your browser: jor1k is an instruction set simulator written in javascript that boots Linux inside your browser. You can play a game, watch some demos or surf the internet using this emulator.

If that’s not enough, feel free to compile your own code and run it in the simulator. There also is a demo where you can edit, compile and run inside the browser, so that you don’t even need a cross-compiler toolchain!

If you want to start with simulating the processor core to just try it out, you have the following options:

While a processor core is still the heart of every system, the peripherals, memory etc. are of course equally important. There are a number of system-on-chip available that you can use to perform RTL simulations, SystemC simulations or perform an FPGA synthesis of an OpenRISC-powered entire system:

If you want to run an operating system on your OpenRISC you have a few options:

A few toolchains are generally supported. A C library is an essential part of your toolchain as it provides you the basic features. The following toolchains with different C libraries are available:

Cross compiling applications to your OpenRISC embedded target and packaging them up into a root filesystem image could be tedious. There are a few options to smooth the process: